5 year old boy loses his leg – who is responsible?

Next to a school, a tree is being cut down. The people cutting the tree do not take into consideration where the tree will fall, once it goes down. The tree falls onto the school next to which it is standing. The tree collapses on top of a class room, smashing through the roof and walls. Inside many children are injured and one boy aged 7 loses his leg. 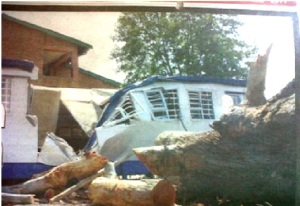 The question is who is responsible for such accidents in our society? Did the people cutting down the tree have to rush the job to get to their next job because of money? Did they not have sufficient training to cut down a tree and due to lack of money, the community could not hire people who did have the know-how? Did the people who cut down the tree simply not care?

One of the crucial points of the Equal Money System will be that people who train themselves to do a specific job, will do so because they realize how it benefits humanity. We will train ourselves not for greed or prestige, but because we treasure life and contribute in developing a world that is best for all. Therefore people who for example in a community will take the responsibility of cutting down trees or tending to nature, will not rush the jobs because they don’t care or because they need to get to the next job. Such people will also be trained effectively because there is no financial reason such as companies hiring inexperienced people at lower wages. Therefore we take care of each other as you would want to be taken care of. Therefore in an Equal Money system the value is life for all equally and the accidents we see now due to human error will decrease significantly, as no one is doing what they do from the perspective of ‘lack of’ or disinterested.

This is the key in the first place to all acknowledging the value of an equal money system. It is in realizing the benefits of such a system. It is not just about ‘equal money from birth’ – it is everything associated with the change in values of humanity. The decision made by the majority of people, to change to an Equal Money system does not just happen on a ‘monetary’ level – it starts because within each we realize, as I have that we no longer want a world where things happen because of greed, because we have stopped caring and now only live to survive.

Currently we live in a world where no-one can be trusted and our children, nature and ourselves are paying the price – at any moment your life or ‘limb’ can be taken away due to the negligence of another. Imagine yourself in one moment having your life or body compromised simply because someone else for a moment acted from a starting point of negligence, simply because they could not care to see you safe? Imagine if the reason why you are injured or killed was because that person did not care because he was being directed by money? This is the world we have created, it is all around you – watch the news. Therefore to say these things happen because ‘someone else’ did not care – is also not valid – we as humanity have all agreed to the capitalist system, to greed, to profit. Therefore it is us who have decided that we will harm each other in the name of money. It is each one of us that is responsible for the pain and suffering caused in this world because everyone together has become lethargic as the human, has almost become ‘evil’. If a god existed I would sure as hell be ashamed because if he is watching what goes on inside each one – what he would see is the true nature of humanity. We are sure as hell not the image and likeness of anything more than what we are now. No-one can exclude themselves from this – because every human looks at what is going on in the name of money and within how the current world systems function and simply shrugs it of and ‘hopes’ it never happens to them or their family. Each person who read this article and all similar articles about the boy who lost his leg, will react for a moment and in your mind secretly think ‘I hope that never happens to ‘my child’ as a fear ripples through your stomach – not considering that the little boy is someone’s child.

This is the ultimate deception we have become as humanity.

Posted in Reality and an Equal Money System, Uncategorized